Rules of all games

It also includes a lot of original solitaire variation not found elsewhere.

Topsy-turvey Queens and King's Secrets are very special solitaire games - the jewels in the crown of BVS Solitaire Collection. 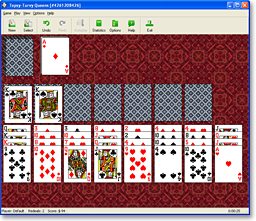 The seven cards with their faces down (closed) are the King's row. The top card of each tableau pile can be moved from pile to pile and to the King's row if it is possible. If a King is the top card of any of the tableau piles it is moved to the King's row and placed on top of the closed card. So this closed card becomes imprisoned. It will be free only after you built up the whole suit over it in order of rank (K,A,2,3..,Q). The King's row fills up from left to right as soon as new Kings appear. The last eighth king doesn't have an imprisoned card under it.

Empty tableaus may be filled with any single card or group of cards in proper sequence.

As soon as you build up the suit so that the Queen is on top, the imprisoned card becomes free. You can move this card only onto the King's row (you cannot move it onto any tableau pile). When you have made all the available moves on the board and you still have cards in the stock you can turn it over two more times. You win when all cards are on the King's row. 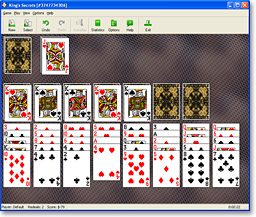 This solitaire is a variation of "Topsy-turvy Queens".

The rules are exactly the same. Each tableau pile contains not four but five cards, which makes it easier to maneuver. But you can only move a Queen to an empty pile (or a set of cards beginning with a Queen).