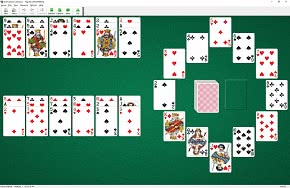 The object of the game
To build each foundation up in suit until the cards on the top correspond to the numbers of a real clockface (with jack as 11 o'clock, queen as 12, Ace as 1, etc.). At the end of the game the foundations at positions 9, 10, 11 and 12 o'clock will contain 8 cards, all others will contain 9 cards.

The rules
The top cards of tableau piles are available for play on foundations. You may build tableau piles down in suit. One card at a time can be moved from pile to pile. When a tableau becomes empty it can not be filled.

When you have made all the moves initially available, click on the stock pile. All tableau piles containing less than three cards are replenished up to three cards in each, if there is a sufficient number of cards, and also one card is dealt to the waste pile.

There is one redeal.