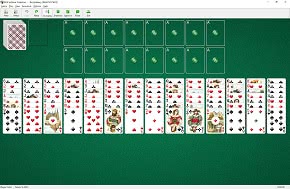 Big Robbery solitaire uses 208 cards (4 decks). You have 14 tableau piles with 7 cards per pile and 16 foundations.

The object of the game
To build the foundations up in suit to Kings.

The rules
The top cards of tableau piles and the waste pile are available to play. You may build tableau piles down in suit. Only one card at a time can be moved from pile to pile. When a tableau becomes empty you can fill the space with any card.

When you have made all the moves initially available, begin turning over cards from stock to the waste pile.

You can move cards from the waste to the tableaus and to the foundations according to the rules.

This four-deck variation of Forty Thieves was invented by Boris Sandberg.

Comment
The rules state that you can move only one card at a time. But, as a shortcut, BVS Solitaire Collection will allow you to move a full or partial build if there are enough empty tableau piles, because you would have been able to get the same result by temporarily moving the extra cards into these empty spaces.