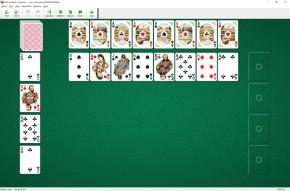 This solitaire uses 104 cards (2 decks). You have 8 reserve columns. One card is dealt to each reserve column at the start of the game. Next four cards are dealt into four tableau piles located to the left of the reserve columns.

Aces are moved to the foundations at the start of the game.

The object of the game
To build Aces up in suit to Kings.

The rules
Reserve cards, that have their lower edge free (i.e. there is a gap below a card), are available to play on foundations and tableau piles. You cannot move cards from one reserve pile to another.

Empty tableau piles are filled from reserve. All empty spaces in the tableau have to be filled before the deal.

When you have made all the moves initially available, click on the stock pile to deal one card onto each reserve column. Gaps created in the reserve by building cards are never filled.