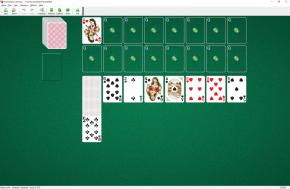 This solitaire uses 208 cards (4 decks). 37 cards are counted out from the deck of 156 cards. The top card is open. This is the reserve pile. The next seven open cards are tableau piles. The next card is placed above. This will be the starter card of the foundations. The 15 other cards of the same rank will be placed next to it during play as soon as they are available.

The object of the game
To build the foundations up in suit until each pile contains thirteen cards, wrapping from Ace to King as necessary.

The rules
You may build tableaus down in sequence and alternating color. Only the top card of each tableau pile and the reserve pile is available for play on the foundations. One card or group of cards in the proper sequence can be moved to another tableau pile.

When one of the tableaus is empty, is automatically filled with a card from the reserve pile if possible, then by any card.

You can turn over the stock pile as many times as you wish.

This solitaire variation was invented by Boris Sandberg.

Tip: You can move cards from the foundations back to the tableaus, if that helps you to win.