How to play Grandfather's Clock Solitaire 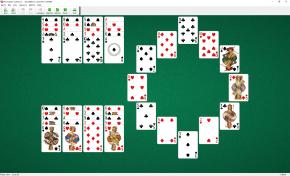 The rules
The top cards of tableau piles are available for play on foundations. You may build tableau piles down regardless of suit. One card at a time can be moved from pile to pile. When a tableau becomes empty you can fill the space with any card.