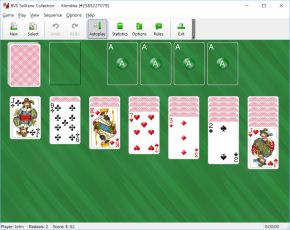 Klondike Solitaire uses one deck (52 cards). You have 7 tableau piles with the number of cards per pile increasing from one to seven from left to right. The top card is face up. You have 4 foundations.

The rules
The top cards of tableau piles and waste pile are available to play. You may build tableau piles down in sequence and alternating color. One card or group of cards in the proper sequence can be moved from pile to pile. If, during play, any closed cards become the top card of a stack, it turns over. Empty tableaus may be filled with a King or group of cards headed with a King.

Histary
Klondike Solitaire was invented by Richard Canfield or likely by one of his assistants as a game for his Saratoga resort in 1899. The rules were more severe than those of modern implementations. Canfield named it after the Klondike gold Rush, which took place at that time. Some people think the game existed before in some form and Canfield just adopted it.