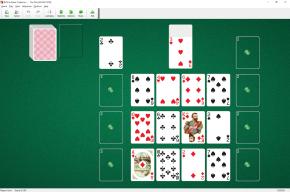 The Plot Solitaire uses 104 cards (2 decks). 13 cards are counted out from the deck. The top card is open. This is the reserve pile. The next 12 open cards are tableau piles. The next card is the starter card of the foundations. The seven other cards of the same rank will be placed next to it during play.

The object of the game
To build the foundations up, regardless of suit, until each pile contains thirteen cards.

The rules
No other foundations can be built until you have played 13 cards on the first foundation.

Only the top card of each tableau pile is available to play. tableau piles are built down in sequence regardless of suit. Only one card at a time may be moved.

No foundation cards can be built on other tableau piles or built upon until you have played 13 cards on the first foundation.

The top card of the reserve is available to play on the foundations only.

When you have made all the moves initially available, begin turning over cards from the stock pile to the waste pile.