How to play Tri Peaks Solitaire 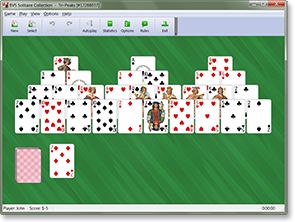 Tri Peaks solitaire uses one deck (52 cards). Four rows of cards are laid out to form three overlapping peaks. One card is dealt face-up from the stock to the waste.

The object of the game
To build all cards on the waste pile up or down regardless of suit, wrapping from King to Ace and from Ace to King as necessary. Another goal is to get a high positive score.

The rules
Only uncovered cards in the tri peaks are available for play on the waste pile. You may build the waste pile up or down regardless of suit.

When you have made all the moves initially available, click the stock pile to begin turning over cards. Deal a card from the stock pile onto the waste pile and begin moving cards from the tri peaks again.

You are penalized on $5 for each card you deal from the stock. It also breaks the sequence, so you get only $1 for the next card you play from the tri peaks to the waste.

You get a bonus of $15 for each of the first two cleared peaks. You get $30 when you discard the last card from the top of the third peak.

If you decide to exit or restart game before the stock pile is exhausted, you get $5 subtracted from you score for each card left in the tri peaks.

History
This game was invented by Robert Hogue.