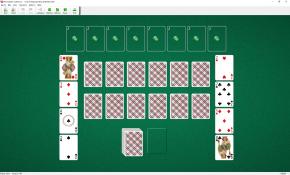 The object of the game
To build foundations down, regardless of suits, from jacks to queens.

The rules
At the beginning of the game, Jacks in the columns are moved to the foundation piles. When the first Jack is placed as a Foundation, two tableau piles become open. Each additional Jack opens another tableau. All top cards in the reserve columns and in the columns are available to play.

When you have made all the moves initially available, click the Stock pile to begin turning over cards to form the waste pile.

All spaces in the reserve columns, created by moving cards to the foundation, are filled by the cards from the Waste pile (if it is not empty), or from the stock pile.

When you first move a card from the "sleeping maid" opened last, the next pile is opened. You can't move cards between piles and columns.

Spaces in the piles cannot be filled.