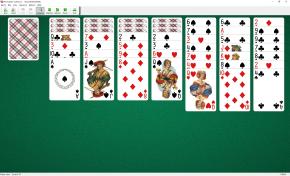 Wasp Solitaire is an easier variaton of Scorpion, which in turn similar to both Spider and Yukon.

The object of the game
To build four tableau piles down in suit, each running from King to Ace.

The rules
You may build tableau piles down in suit. Groups of cards can be moved regardless of any sequence. Any face up card in the tableau can be moved to make a build. All the cards covering it are moved together as a unit. During play, any closed cards that becomes the top card of a pile, turns face up.

Empty tableaus may be filled with any card or group of cards.

When you have made all the moves initially available, click on the reserve pile to deal the three remaining cards face up to the three leftmost piles.

This game is a variation of Scorpion Solitaire. The only difference is that empty tableaus may be filled with any card or group of cards. It gives the player more chances to win.