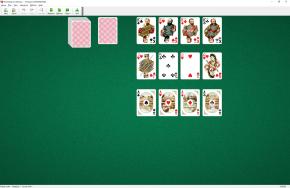 Parisienne Solitaire uses 104 cards (2 decks). You have 4 tableau piles, 1 reserve pile and 8 foundations. Four cards are dealt to tableaus at the start of the game. The fifth and the sixth cards are dialt face down to the reserve.

Aces (one of each suit) are moved to the bottom four foundations at the start of the game.

Kings (one of each suit) are moved to the top four foundations at the start of the game.

The object of the game
To build the Aces up in suit to Kings, and the Kings down in suit to Aces.

The rules
The top cards of tableaus are available for play to the foundations. You cannot move cards from one tableau pile to another.

You can move the top card from one foundation pile to another of the same suit when it continues in the correct sequence. Any or all cards may be transferred to another foundation, including the Ace or King at the bottom.

When you have made all the moves initially available, click on the stock pile to deal four cards to tableau piles and two cards to the reserve, and continue playing.

When the stock is empty, all the cards of the reserve are turned face up. All of them are simultaneously available for play to the foundations.

When you have made all the moves available, click on the empty stock pile gather all cards from the tableau and the reserve back to the stock.

In the last redial no cards are dealt to the reserve.

This game is a variant of Duchess of Luynes.